Ever wonder how South Bay Communications & Security came to be? Read our story below!

LISTEN TO OUR STORY ON THE HR CHAMBER PODCAST!

The year was 2000, and three people sat huddled around computers in a garage in Chesapeake with a singular focus—to build an exceptional communications company that could stand the test of time.

Brothers Chris and Wally weren’t new to growing a business. It’s in their blood. As preteens they worked with their dad and grandfather in the family business, so they’ve long understood how to work hard for something, and how to work together. They truly enjoyed it, and it certainly paved the way for their future endeavors. 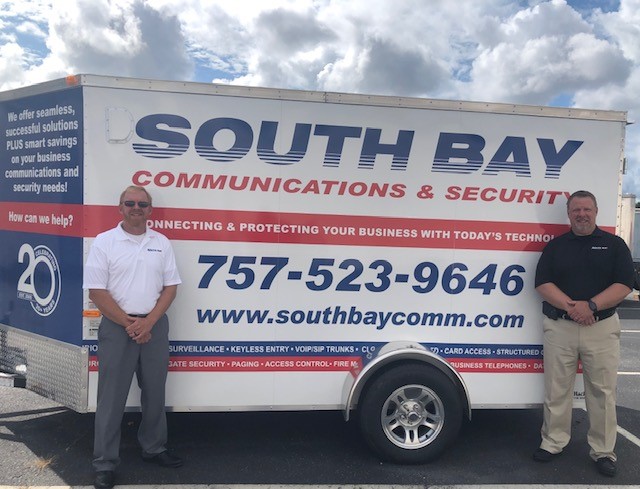 It’s really no surprise the brothers found a way to team up again in adulthood. Wally found opportunity first. After graduating from ODU, he found an opening at what used to be called an “interconnect company” (what people more commonly know today as communication companies). It was 1994 and this position as a field technician allowed Wally to learn all the ins and outs of structured cabling and all the pieces that worked to create complex business connections. Chris relocated to Chesapeake in 1997, and in time the brothers realized they could and should start a venture of their own.

In 2000, Chris and Wally launched South Bay, Inc. out of Wally’s garage in Chesapeake. There were three total employees—the two brothers plus Wally’s wife Kim, and they worked to build a foundation that would allow the business to not just function, but flourish. The security division was added in 2007, and in 2008 the company was rebranded as South Bay Communications.

One of the founding principles of the South Bay business model is that it’s built on relationships, and it should come as no surprise—the brothers’ grandfather was all about time and efficiency, while their dad valued personal connections. Chris and Wally found a sweet spot between the two with service that’s both extremely customer-centric while also delivering exceptional skill and efficiency.

“When we give a bid it’s by design, not just giving the lowest bid. We fully believe our job is to take care of the customer and build that relationship, and that will lead to long-standing connections.”

South Bay Communications & Security is dedicated to strengthening their relationships with the communities they serve. There has always been a desire to help other people, no matter who they are. As the company has grown, the impact on the community has as well. From volunteering to serving the local chambers, schools, and organizations they are actively involved - just follow them on LinkedIn and Facebook!

“Once you’re a client of ours, we’re going to support you in whatever ways we can in the community.”

Over South Bay’s 20+ year history, the foundation of the company has always been to create long-term, loyal customers and dedicated employees. From grassroot beginnings, South Bay Communications has grown to employ 50 people, assist hundreds of businesses with their communication and security needs, and become a highly trusted and dependable name in the industry.

“Our professional goal is to connect and protect your business with today’s technology, while our mission is to remain dedicated to our partnerships for lifetime relationships. We look forward to continuing to do both for as long as we possibly can.”